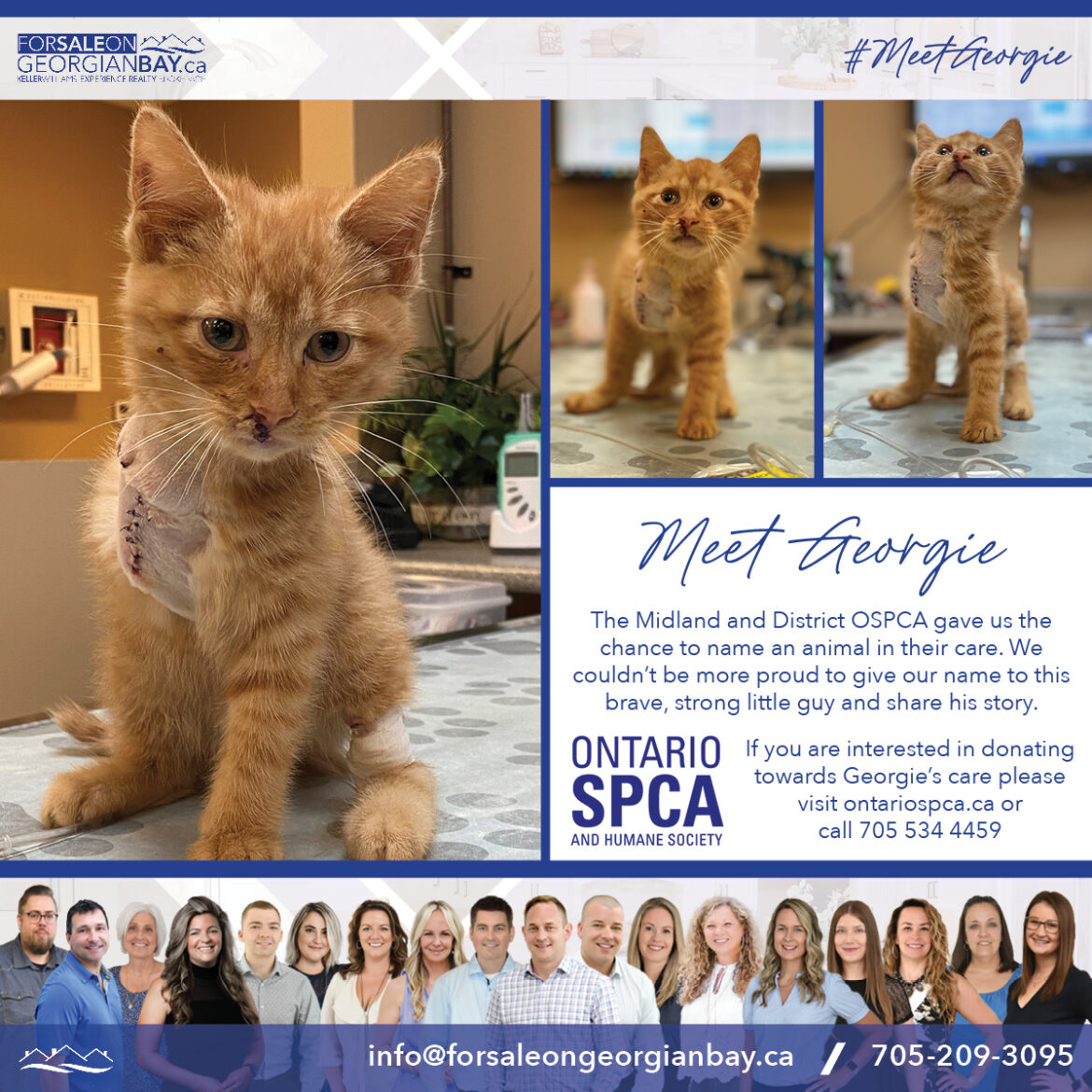 The Midland and District OSPCA recently gave us the chance to name an animal in their care and we picked the name “Georgie”, a nod towards Georgian Bay and a symbol of what connects all of our communities.

We couldn’t be more proud to learn that our name was given to this brave, strong little guy with a story of resilience that inspires us all.

Our kitten, Georgie was found abandoned at the side of a road in Orillia recently.

A passerby happened to see the hurt feline and came to his rescue, taking him to the Orillia OPP detachment.

“An officer rushed the kitten to the Mariposa Veterinary Hospital in Orillia,” said Robin Elliott, the community development coordinator for the Midland Animal Centre.

Georgie, was found to have suffered extreme nerve damage to his right front leg. He had also lost the skin on his chin and abdomen area.

“To give Georgie the best chance at a pain-free life, amputation of his leg was recommended,” said Elliott.

The cat also needed extensive stitches to try to reattach the skin around his chin and abdomen, Elliott explained.

The approximately 14-week-old kitten was transferred to the Allandale Veterinary Hospital in Barrie for surgery and is now on the road to recovery.

The good Samaritan who found Georgie generously donated $400 toward his emergency care and the OPP also held a fundraiser at the detachment in Orillia, raising $750, said Elliott.

It’s “an amazing story of collaboration and love,” she said.

However, more money is needed to cover the cat’s veterinary costs. It’s estimated about $500 more is needed and Elliott is hoping local pet lovers might step up to support the effort.

To make a donation, call the centre at 705-534-4459 or donate online at www.ontariospca.ca and specify the Midland Animal Centre for the fund allocation.

Elliott said the Midland facility is looking after the cat’s care because the Orillia Animal Centre already had a “major medical case” and did not have the capacity to take on another one.

Whatever happens, it looks like Georgie will have a safe and secure future. Elliott said the cat is recovering in his new “foster-to-adopt home” of a friend of the OPP officer who originally rushed him to the vet.

Officials urge people who are unable to look after their pets to contact their local OSPCA or animal rescue agencies.

We had an amazing night at the Keller Williams Advantage & Experience International Awards Night! We are so proud to have walked away with a Quadruple Platinum Award and #2 in GCI and #3 in Units – such incredible accolades in just our second year as a team!

As proud as we are, we are even more thankful to our communities and clients for trusting us to navigate and help them achieve their Real Estate dreams and goals.

We loved going Pink throughout October and today, we are so proud to be able to donate $10,000 to the Canadian Cancer Society Ontario to help support all the amazing work they do.

Thank you to everyone who shared our Pink posts, talked about our Pink signs and supported us through Breast Cancer Awareness Month.

We already can’t wait to see our Pink signs back up across the community next year!

Big “Thank You” to Mike Cillis and his team at North Simcoe Signs for helping provide us with our beautiful Pink signs that were seen across all of the community.

October 2021 Market Report For Our Communities

Winter is coming and the market is shifting. Across the region we saw 123 sales logged which was down 32% on this time last year. This comes as for the first time in a while, we saw a 7% rise in Active Listings. However, inventory is still incredibly low – down more than 60% than pre pandemic continuing 2021 theme of low inventory. With less options on the market, we continue to see house prices rise as the new average house price sits at $768,624 – up around 20%. As we move towards winter, buyers will become even more motivated so expect to see prices continue to rise.

Across our communities, we saw these trends continue. Midland’s average price rose 23% compared to last year whilst Tiny’s average price edged towards the $1m mark at $935k. With low competition, it’s still a great time to take advantage of the market and achieve maximum price for your property. 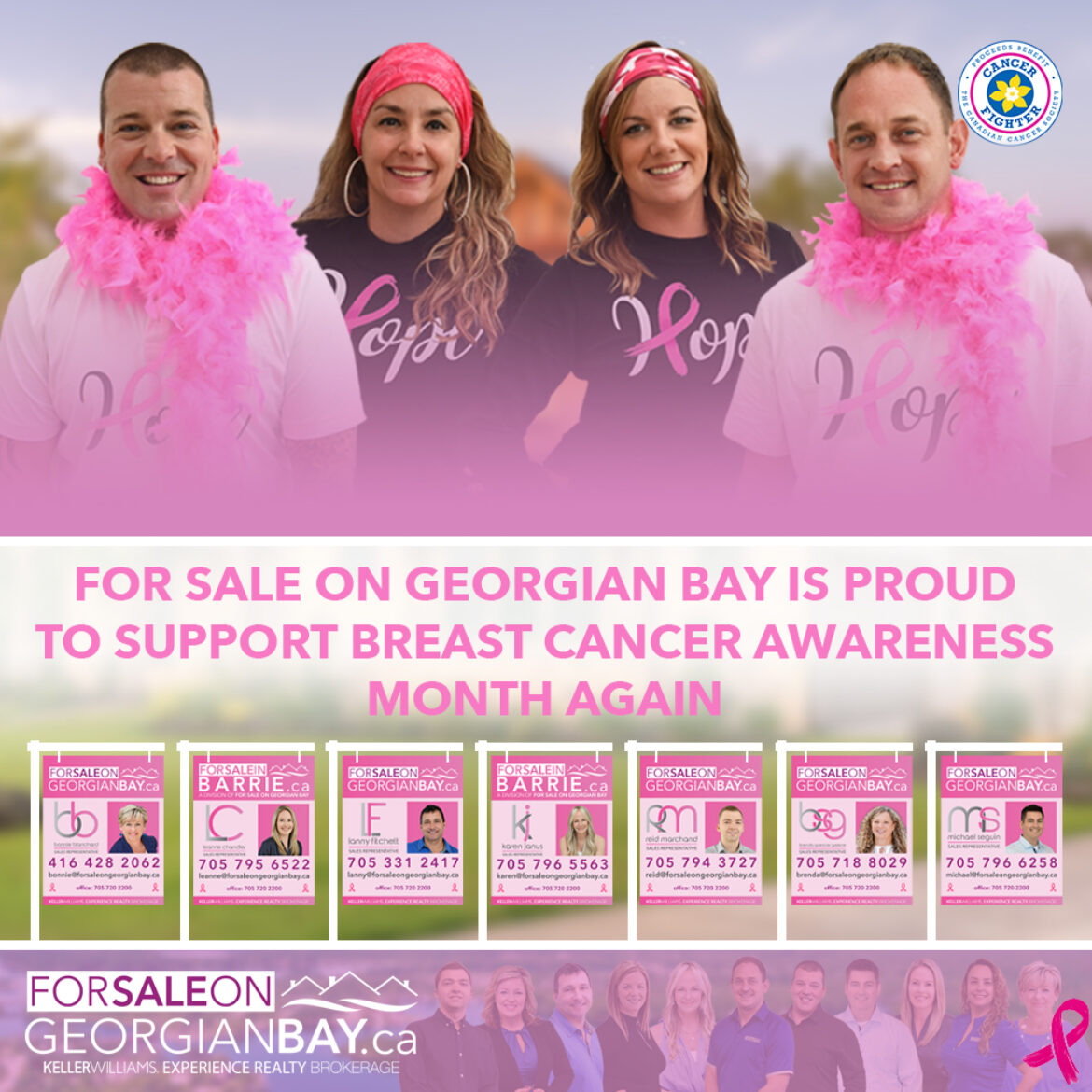 As October nears, so again does the Canadian Cancer Society’s Breast Cancer Awareness Month. Once again, For Sale On Georgian Bay will be proudly supporting this amazing cause for the month of October.

Last year, we raised $8,500 during October and this year, we’re looking to raise even more!

We will be turning all of our For Sale signs across the community bright pink along with all of our social platforms, so be on the look out as we help raise awareness about Breast Cancer. Special mention to North Simcoe signs in Midland who last year were incredibly kind and generous in donating 50% of the printing costs of our Pink Signs. Thank you for your help and support towards this cause.

Did you know that the latest stats from the Canadian Cancer Society indicate that 1 in 8 women will develop Breast Cancer. Awareness and early detection is crucial, combine that with the better therapies that we have access to now, means that we’ve seen a 44% decline in the Breast Cancer death rate since 1988. Despite this, the number of Breast Cancer diagnoses is estimated to increase 25% between 2015 and 2030 and that’s why it’s so important to support Breast Cancer Awareness Month.

We will be rolling out all of our Pink items across the month of October and making regular donations in aide of the Canadian Cancer Society so stay tuned, get involved and think PINK!

May Market Report In Our Communities

As we still experienced restrictions and lockdowns across Midland, Penetanguishene, Tiny and Tay, we saw the trend of low inventory continue. Active listings are down over 50% compared to 2020. With low competition, now is the time to take advantage of the market and achieve maximum price for your property.

March Market Report In Our Communities 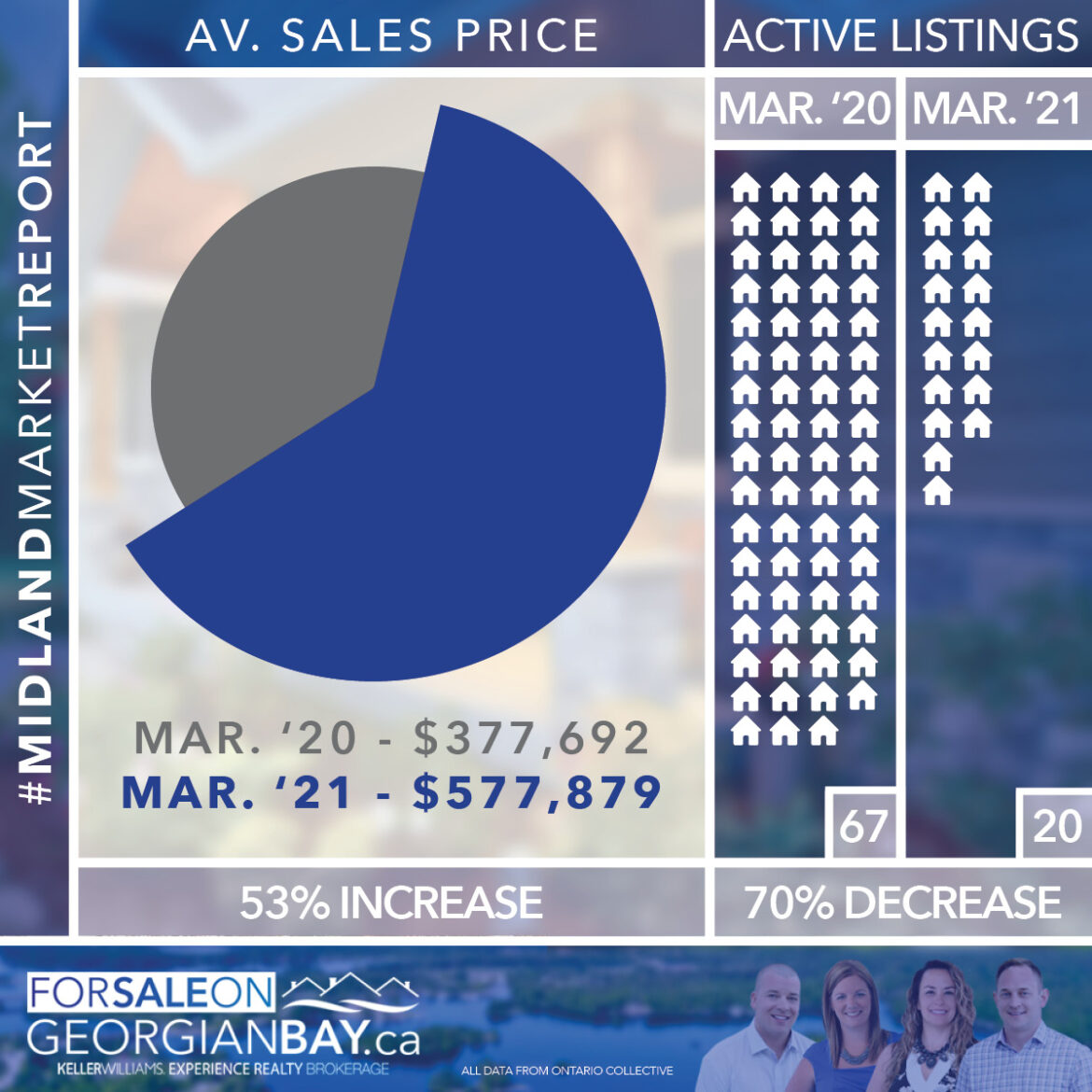 As we bounced in and out of restrictions and lockdowns across Midland, Penetanguishene, Tiny and Tay, we saw the trend of low inventory continue. Active listings are down over 66% compared to 2020. With low competition, now is the time to take advantage of the market and achieve maximum price for your property.

Thank you to everyone in our amazing Community that took the time to vote for us, For Sale On Georgian Bay as the “Best Real Estate Office” in this year’s Reader’s Choice Awards for the Midland Mirror.

We were delighted to discover the news and honoured, humbled and very excited to receive such an accolade within our first year of Business in the community.

The support of our Community is what drives us to empower its residents with the best Real Estate advice available.

To begin the year we saw a large 36% increase in sale prices across Barrie when compared to 2020. As restrictions and lockdowns increased across Simcoe, we saw the trend of low inventory continue.

Active listings are down over 68% compared to 2020. With low competition, now is the time to take advantage of the market and achieve maximum price for your property.

Happy New Year from everyone at For Sale On Georgian Bay! You don’t need us to tell you that it’s been ‘quite the year’. 2021 is a year that will be welcomed with much hope and optimism for many, a fresh start that everyone is ready to grab with both hands.

We would like to extend our gratitude to all the front line workers who faced the many challenges of 2020 and worked so hard for all of our communities. Thank you for everything you have already overcome and for what still lays ahead in 2021. Your strength is what fuels our community.

Real Estate has been classified as an essential service through all the lockdowns and restrictions this year. We listened, we learned and we adapted to our new way of work, always striving to maintain the level of professionalism and service that you would expect of us. We were proud to be able to help so many members of our community find their shelter in the storm this year.

2020 will forever be remembered around the world, but closer to home it was a special year for us all as we saw “For Sale On Georgian Bay” founded. We hit the ground running as we navigated the Covid Real Estate Market whilst re-introducing ourselves and our years of experience to the community. None of this would have been possible without the support of our incredible clients, our beautiful communities, our friends and our families. Thank you all for continually trusting us when it comes to one of the biggest decisions in life, we’re proud to be with you every step of the way.

We wish everyone a very happy, healthy and successful 2021, we really can’t wait to see what is in store.

Note: Our new year photos were taken prior to lockdown. All agents were photographed separately and have been digitally placed together.

It’s been a long, hot and humid summer so far. Along with special summertime staples like trips to the pool,…

As we look back at July, we saw a really interesting shift that presents opportunities for buyers and sellers. We…